A very non scientific look at horizontal fore and aft foot displacement of top 8 TOTAL finishers in 85kg category. First foot position is approx BB at hip, last position approx lowest hip position in catch. All were with each lifter’s heaviest successful snatch. Tian (China) bombed in CJ and did not total.

That red line was painted onto the platform. There definitely may be prospective problems due  to the angle of view.

The current wr holder Rybakou (phenomenal 187kg) has negligible movement fore and apt. He has a narrow catch position with outstanding ankle flexion.

You can also see that moving the feet out extra wide in the catch MAY hinder the ability to sink the hips into the lowest position in the catch. 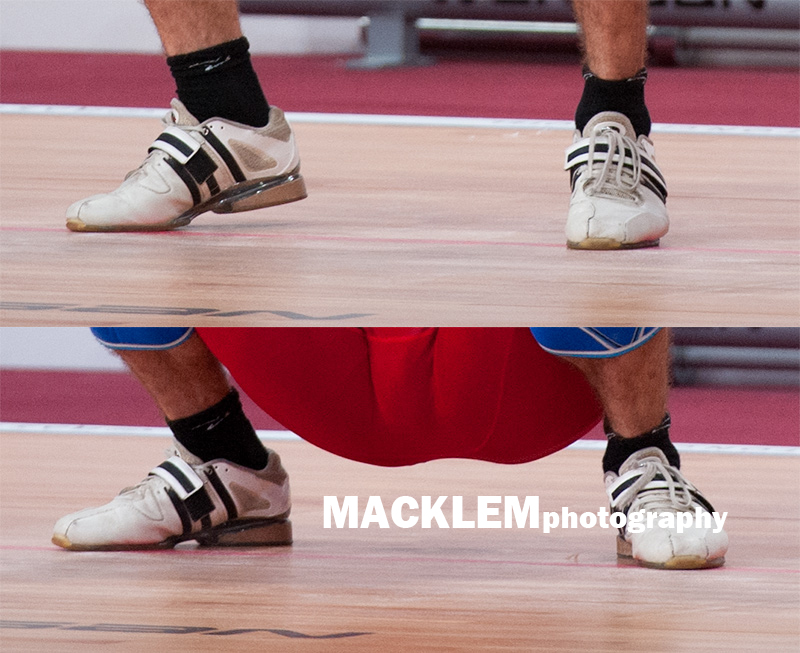 I have seen the Chinese do this exercise in the training hall at a number of world championships. Typically within a day of the Chinese showing a “new” accessory exercise, there will be hundreds of lifters throughout the world “trying” the new exercise. And without any thought. Similarly if Lu’s program or any other elite lifter’s program is published on the internet, within a day again hundreds would be trying it. Again with little thought.

We have never lost sight of our priorities in squatting since she took up the sport 4 years ago.
Some universal priorities;

I treat doing front squats with the same technical zeal as the snatch and CJ. I believe there is always room for some technical improvement in squatting. My coaching philosophy is that until these priorities are fully addressed I see little reason to push for more weight.

Big numbers in squatting will never be my primary focus. The big focus is in achieving big numbers in the snatch and CJ. Squatting ability is a partial means of achieving this goal.  I am aware of the  numbers needed in front/back squatting* to do bigger numbers in the CJ. In the case of RS I am using B sq = 131% of CJ  and Fr sq= 121%. This correlation can be important, but only with the proviso that the squat adheres to the technical points above. Pushing numbers beyond this correlation does not guarantee higher numbers in the snatch and CJ, especially when  done at the”expense” of training the snatch,clean and jerk. Or when it short changes improving the qualities of speed-strength/power, doing movements that stress the stretch shortening cycle, or address flexibility of movement.

These percentages are individualized for this lifters qualification and current progress, there is always a built in variably of +- 5%. This the starting point for programming how much weight in (kg) is planned day to day in squatting. So if  for example a lifters best CJ = 200kg then the bsq is based off of 200kgx 1.31 = 262kg. So 70% for reps are done with 262kg x0.7= 183kg. This is the easy part. The hard part is in deciding the# sets and reps and intensity; day to day and week to week and month to month. With the goal at the end of  a cycle having increased both squatting strength and the snatch and CJ numbers in balance.

In OL it is a delusion that you will get faster improvement by increasing strength to the detriment of technique. Heavy squatting (especially back squats)with high intensity, higher reps and volume doesn’t do a particularly good job of working the dynamic qualities in the above paragraph.  The other problem is that a large degree of fatigue accumulates in the prime movers of the OL (legs and back); requiring much longer recovery periods and a reduction of intensity in the snatch and CJ . For most sessions working with speed-strength by using 80-95% intensities in the snatch and CJ is the primary focus; not squatting.  Attempting to do this with larger amounts of fatigue that has been created by heavy squatting becomes an exercise in futility. The intensities of 80-95% are used to master and improve technique in the snatch and CJ.  Careful programming and adaptions can help mitigate at least in part these deficiencies. So that with time, lifters can eventually focus on heavy intensities in both the Olympic lifts and squatting SOME OF THE TIME.

The soviets had perhaps the right slant when they calculated deficits in explosive strength and not just strength. While an elite Olympic weightlifter must possess strength, the defining quality of strength needed is explosive strength. It is as the soviets said “there is no correlation between the ability to display great strength and the ability to display it quickly. One can have great strength, but at the same time not have the skill to realize it quickly especially in snatching and cj.”

Deficits in explosive strength can possibly be calculated using the formula below, ie so if the numbers you get are under 58% or 75%  you probably are not using your PRESENT strength effectively and the answer is in all likelihood not more strength via squatting. It would seem expedient to focus energy in other exercises. This goes somewhat against the often heard maxim that you can never be too strong. Like most statements it is not black and white but a shade of gray, it really depends.In sports like strongman and powerlifting (a misnomer for sure)the statement that you can never be too strong is correct.

Note: in the calculation there a little inaccuracy because I don’t test singles in squats ( I project from doubles or triples). The squat number of 240kg may have been under estimated by ~ 5-10kg. The % are guidelines are and not absolutes. If you get numbers like 51% and 70% that would be a problem IMO.

Another example; you often see many squatting videos on you tube. Real world lifter “X” a few months before going to a major international Olympic competition posts a back squat single of ~300kg. A passable back squat in anyone eyes, but after many years of pushing squatting you can see the stiffness , reduced flexibility and reduced joint range. The big squat gave him a value of 63% in CJ and 50% in the snatch. Typically if training had been in balance over many years by using 130% of CJ = as a standard figure for the back squat you would IMO not see these restrictions. So normally a back squat of 300kg in addition to primary focused snatch and CJ training should yield a CJ of approximately 225kg.

The energy cost of each exercise (sets and reps and intensity) per session is evaluated and considered in all programming decisions. One can see the varying energy costs for 10 sets of 3 at 85%, 5 sets of 10 reps at 70%, or 4 sets of 2 resp at 80%.  A lifter does need to eventually “train” the ability to perform maximum weights with slight to moderate levels of fatigue in certain weeks, but IMO not longer than 1 week. Obviously what is done in this “fatiguing” week will directly affect what changes have to happen in the next.

Some successful countries have opted for just using the front squat in the 4-5 weeks before a competition.

I always remember the American coach Steve Gough* saying that his elite lifters trained snatch and CJ heavy, after which time if the lifter has the energy left to squat; then do so. What I “get” is that we have to set up priorities or at least not lose sight of them. And relegate the less important to secondary roles. Squatting is absolutely the “key” exercise in this secondary role.

Please note, I am well aware of Russian squatting programs; I have a copy of the 1974 Russian yearbook(translated) and acquired in 1975. So I am somewhat ahead of the fervor. Back in the “olden” days (almost 40 yrs ago) I did the routine several times. But that was then and this is now, and in 4o yrs of study I think I have a better understanding. But some would disagree.

Ruslan Nurudinov UZB 105kg takes the arms out of the equation in the first phases of the jerk. The initial force is from the legs, efficient jerking is about leg strength and taking advantage of the stretch shortening cycle.